In   2011,   indigenous   men and   women   at   the   Peru- Bolivia   border near  Lake Titicaca  successfully  halted one  of  the  world’s  largest projected   silver   extraction projects using radio for local organizing and social media—particularly, Facebook  and  WhatsApp— to garner regional and international  support.

In May of that year, on the eve of a national presidential election, 25,000 Aymara and Quechua from around the region gathered in the principal city of Puno to protest the Santa  Ana mining project managed by Canada’s Bear Creek Mining Company.

After weeks of road blockades and multiple incidents of police brutality, during which protesters were joined by thousands of supporters and featured in international broadcasts on CNN, FoxNews and other major networks, the Peruvian state revoked the site prospecting license.

Since the 2011 protests, Aymara community radio activists, or comunicadores, have begun to train at international indigenous communications conferences where presenters claim that using “media power” will help advance gender equality in communities and support the tactical defense of Pachamama. Indigenous activists at Santa Ana argued that the proposed mine would contaminate local water sources, including the sacred lake, Titicaca, and demanded that the Peruvian government recognize the legitimacy of Aymara communities and  the  sanctity  of Pachamama, the animate Earth Mother who pervades every level of social meaning in the Aymara sense of place (Stone 2009). 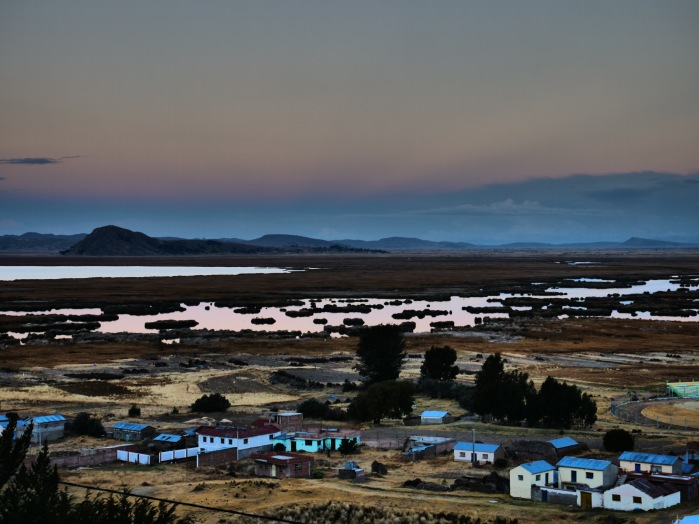 Given the extreme glacial melting of the Andean Cordillera (Rasmussen 2015) highland Peru is one of the most notable exemplars of the consequences of rapid climate change. Peru exercises control over vast ecological territories. In the Andean Highlands, mining and gas extraction operations threaten to further pollute Lake Titicaca, a watershed considered vital, sacred and alive by the Aymara.

Here in the Peruvian altiplano, or high plains desert, indigenous radio fields comprise both the social and geospatial networks of people and places where community radio content is created, produced, listened to and discussed. When imbricated in social movements, these Andean radio fields become site of identity formation and political strategy. Bessire and Fisher have examined recent renewal  in anthropological concern with radio fields, noting that “radio’s rugged and inexpensive materialities have become invested with new import in the many places where topography, poverty, or political oppression limits access to web connectivity, computers, or electricity” (Bessire and Fisher 2013:364).

Below, Aymaras sift crops while listening to the radio during an afternoon of work on Chucuito Peninsula, Puno region.

Culturally, the Aymara see their landscape as animate, having a willful presence, known as Pachamama, who is both embedded in the landscape and transcendent. Within communities, many other Earth Beings reside (De La Cadena 2015).

Most frequently, the two highest peaks within a community landscape are considered the Achachilas, or ancestor peaks, of the place. The highest peak is considered male, and the second highest, his female compliment.

In Huacullani, the community’s feminine Achachila sits atop a silver reserve projected to be one of the largest in South America.

The ethnohistorical record shows a historical continuity to the Aymara’s self- identification as autochthonous inhabitants who emerged from Lake Titicaca after being created by Pachamama in the realm of Manqa pacha, the underworld, place of transformation, death and reemergence (Silverblatt 1987).The Aymara live and dwell and have their being in the realm of taypi, meaning center place, or navel. The land of human dwelling is also known as Aka pacha, the Center world. The word Pacha means ‘everything that exists’ ‘totality’ or ‘holism’. It means both “time” and “place”, embedded, as one. Adding to Pacha the modifier, mama, makes her gendered. She is the landscape of Aymara Radio.